A Batty Night at the Operetta! 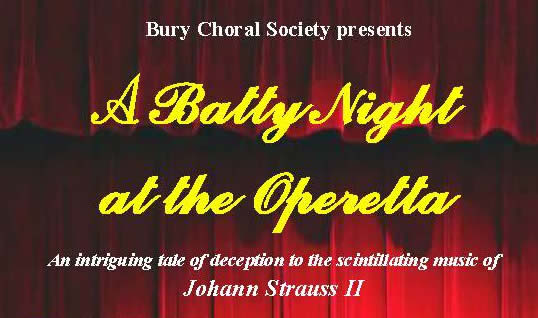 A Batty Night at the Operetta! A curious title for what was, in fact, a semi-staged performance of the younger Johann Strauss’s scintillating operetta, Die Fledermaus (The Bat) but with added entertainment performed by Bury Choral Society at Stand Parish Church on Saturday, 10th March.

Joined by a strong cast of seven soloists, a string trio and piano accompaniment by the ever effervescent Jonathan Ellis and led by the dynamic Juan Ortuño, this may have been a little out of the comfort zone of this well regarded choir but it was apparent to all that this was an evening to enjoy the glorious tuneful music of Vienna and a tale of deception and revenge. And we did enjoy it! Not forgetting Juan Ortuño’s dancing the Fandango with castanets!

Commencing with the waltzes from Tchaikovsky’s Eugene Onegin and Franz Lehar’s Merry Widow to get us into party mood, Dean Parker, whose clear tenor and diction was much appreciated, and sopranos Lorna Rushton and Jessica Hope unfolded the tale of lover’s misdemeanours and revenge by Falke, ridiculed for being drunk and dressed as a bat. Despite partly working off the score, this was a splendid ensemble of singers later joined by the other members of the cast and choir. Jordan Pointon’s (baritone) Dr Falke, powerfully sung and acted, Lorna’s mature soaring singing as Rosalinda, Helen Gregory’s dashing Count Orlofsky, Samuel Jackson (baritone) as Eisenstein and David Cane as the prison governor completed this excellent cast who seemed to enjoy the evening as much as the audience.

Bury Choral Society’s final concert of the season, at Bury Parish Church on Saturday, 12th May, will include Rossini’s Stabat Mater and Puccini’s Messa de Gloria.

We are BACK! See below for our Latest News and our concert programme here  View